The Adelaide Desalination Plant at Lonsdale is our largest desalination plant. It is Adelaide’s only climate-independent source of drinking water. The plant has been delivering drinking water since 2011.

Drinking water produced by the Adelaide Desalination Plant is pumped along our 11 kilometre transfer pipeline to storage tanks at our Happy Valley Water Treatment Plant, where it’s blended with treated water from the reservoir. The interconnection of our network pipelines and pump stations gives us the capability to supply drinking water produced at the Adelaide Desalination Plant to customers from Aldinga in the south, right up to Elizabeth in the north.

Map of suburbs supplied by the Adelaide Desalination Plant

List of suburbs supplied by the Adelaide Desalination Plant

In an agreement reached between the state and federal governments, the commonwealth will meet the costs associated with the increased production of drinking water, freeing up the equivalent release from the River Murray to help drought-affected farmers.

The state and federal governments reached agreement to increase production at the plant to provide 40 gigalitres (GL) of water to 30 June 2020 with no adverse impact on flows to South Australia, water prices or Adelaide’s water security as well as a $10 million Drought Resilience Fund for farmers.

Through to 30 June 2020, the plant will produce 40GL of water, with an extra 60GL in 2020-21 subject a review of its effectiveness, costs, water availability in the Basin, and the state’s water security. 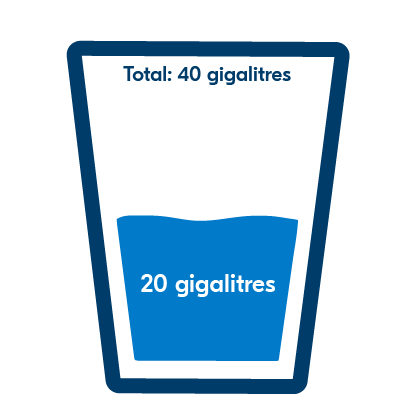 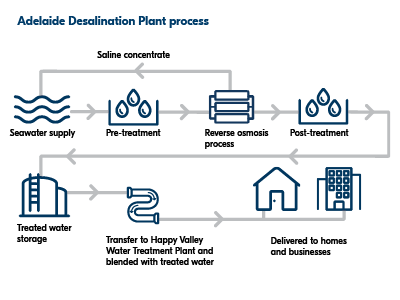 *The Adelaide Desalination Plant is in standby mode during wetter months of the year, when customer demand is typically at its lowest. No water is produced during this period, providing the opportunity to undertake maintenance while the facility is in standby mode.

In full operation, the plant can produce 100 gigalitres (GL) a year. This is about half of Adelaide's annual drinking water needs.

This flexibility means we can align production to rainfall and efficiently meet our customers’ supply requirements, including supply high quality drinking water in times of low rainfall and drought.

When other water sources are plentiful, we maximise the service life and value of the facility and minimise electricity costs, by switching to a minimum production mode.

For around three months each year, drinking water demand is typically low. During this time, we undertake maintenance while no water is being produced. This is called standby mode.

This operating pattern enables production to be swiftly increased when necessary and has been assessed as the most prudent by independent expert analysis and our economic regulator.

We regularly host tours where visitors can see the vast site by bus before heading inside to a viewing area in one of the main process buildings. Tours run for around one and half hours and bookings are essential. Find out more and book your tour

This drinking water is then supplied to about 450,000 homes and businesses from Port Adelaide in the north-west to Noarlunga in the south, Blackwood in the foothills and Adelaide’s CBD.

Minimising the environmental impact of supplying safe clean drinking water is important. Sustainable design principles have reduced this facilities impact and the site has one of the smallest carbon footprints of any desalination plant in the world. Some of the ways we achieve this is by:

Independent reviews of the Adelaide Desalination Plant’s environmental performance on EPA licencing monitoring requirements confirm operations of the plant does not cause harm to the environment.

Along with government and community groups, we also help protect the Gulf St Vincent.

Returning salt to the sea

The Adelaide Desalination Plant produces saline concentrate as one of the by-products of the desalination process. This concentrate is put back into the ocean using a series of special diffusers.

The diffusers sit about one kilometre off-shore and are designed to rapidly mix the concentrate with sea water to dilute it. The other important role of the diffusers is to keep the salinity levels consistent in the Gulf St Vincent.

The intake system used on the desalination plant was designed to minimise the risk of any marine life getting caught in the water intake. This is achieved by drawing the water in slowly.

Using baited remote underwater video cameras, we have observed a wide variety of fish and other marine animals living on the artificial reef surrounding the outfall.

It’s important to note this area is also part of a marine exclusion zone, so there’s no fishing allowed, and permanent security cameras monitor the site day and night.

This video taken in 2018 shows the fish and marine life that have made the area around the diffusers home.

The design of the plant's out-fall system beneath the cliffs and under the seabed, reduces its impact on the nearby coastal reefs.