Desalination across the state

Desalination across the state

A small seawater desalination plant was constructed at Penneshaw on Kangaroo Island in 1999.

Seawater is drawn into the plant through an intake pipe and pre-screened. UV disinfection is used to minimise biological growth and filters remove most particulate matter. The filtered seawater is forced under high pressure through reverse osmosis membranes that allow fresh water to pass through, with very little salt. The desalinated water is re-mineralised with carbon dioxide (CO2) and marble chips before it is disinfected with chlorine and supplied to customers.

The plant can produce 400 kL of drinking water per day. 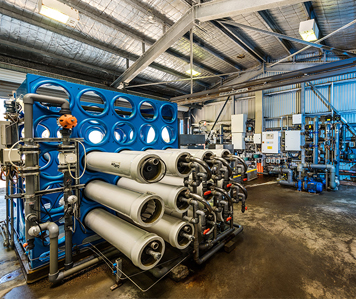 Water for the Hawker township comes from a local groundwater basin.

The groundwater is very hard and it is high in total dissolved solids, which makes the water very salty. While this water meets the Australian Drinking Water Guidelines (2011) health criteria it tastes salty.

Working together with the Flinders Ranges Council we found a solution that would work in a remote location and now we improve the taste of the water at the Hawker Desalination Plant.

The plant began operating in August 2014 and can produce 500 kL of drinking water per day. 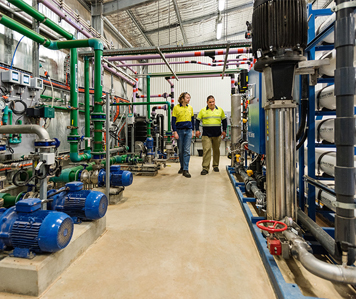 The management of water services in Leigh Creek shifted from Flinders Power to us, in December 2016.

Leigh Creek draws drinking water from a number of local bores and due to the relatively high salinity of the ground water supply, a small desalination plant is used to treat the water.

The plant can produce up to1.25 ML of drinking water a day.

Being able to successfully operate desalination plants is especially useful in remote locations such as the Anangu Pitjantjatjara Yankunytjatjara (APY) Lands, to help ensure reliability and sustainability of the drinking water supply for everyone living in these communities.

These plants treat water from local bores to ensure it meets the Australian Drinking Water Guidelines (2011).

- Commissioned in 2014.
- 14 kW solar installed September 2018, with plant timed to run during daylight hours only
- Total capacity of 40 kL/day 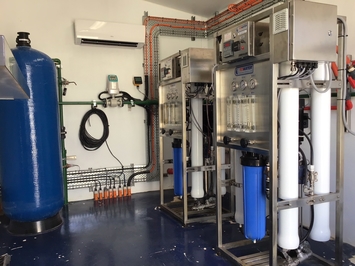 Proposed desalination for the Eyre Peninsula

We are committed to providing our customers with safe, clean drinking water.

A dependable supply requires a reliable source. The majority of water on the Eyre Peninsula is sourced from groundwater which is drawn from the Uley South Basin with about 20 per cent coming from the River Murray via the Morgan to Whyalla pipeline.

Together with the Department for Environment and Water we are measuring and monitoring critical indicators that assess the health of groundwater resources including the Uley South Basin.

Mindful of protecting the groundwater resources following three consecutive years of low rainfall and recharge of the Uley South Basin, we are now progressing the option to supplement the Eyre Peninsula’s water supply with seawater desalination.

Our focus is on managing the health of water catchments so we can deliver safe, clean drinking water to our customers living and working on the Eyre Peninsula while protecting and enhancing the area for future generations.