Solar powering our way to a zero cost energy future

To achieve our ambitious vision of a zero cost energy future, we’re investing more than $300 million to install 242 gigawatt hours (GWh) of new solar arrays and 34 megawatt hours (MWh) of energy storage devices on our sites across South Australia.

The solar arrays and energy storage devices will be installed at around 35 sites by the end of 2020, increasing our own generation capacity and delivering the largest leaps on our path towards a zero cost energy future.

Here’s a few of our larger sites that will be housing solar panels.

Our Happy Valley Reservoir and Water Treatment Plant is an important part of South Australia’s water supply system, with over 40 per cent of Adelaide currently supplied with water from Happy Valley. The plant currently consumes 8,500 to 10,000 MWh of electricity per annum.

Following extensive discussions with local community members, planning and site preparation is now underway for around 16,000 MWh of solar panels in the northern portion of the Happy Valley Reservoir Reserve, along Main South Road and Black Road. 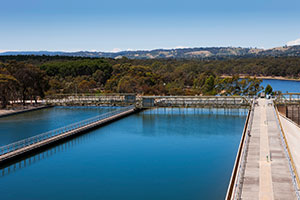 Civil works are underway to install 12,000 MWh solar array on the Morgan to Whyalla Pipeline’s third pump station at Geranium Plains near Robertstown, which is one of four along the 350-plus kilometre pipeline that transports treated, high-quality drinking water to customers between the River Murray and Upper Spencer Gulf.

Delivering water from our Morgan Water Treatment Plant requires a significant amount of power. The energy generated at this site, along with the pipeline’s other pump stations once solar arrays are installed, will help reduce its overall draw from the energy grid without compromising on performance. 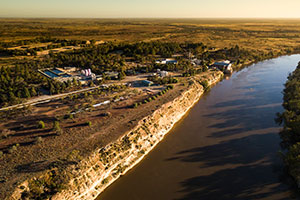 Our city’s insurance policy against future drought, the Adelaide Desalination Plant has been productive ever since it was first switched on in 2011, producing more than 150 billion litres of drinking water to date.

The process of desalination is an energy-intensive activity, and to help minimise electricity costs and the plant’s environmental footprint, innovation and energy efficiency was central to the construction of the plant. It was designed to produce some of its own electricity to off-set its usage, and incorporates hydro-electric generators that capture energy from the water moving through the outfall, producing around 400 MWh each year.

To complement the plant’s existing roof-mounted solar array, planning is now underway to install around 16,000 MWh of solar panels as part of our zero cost energy future, which will significantly offset its current energy draw and reduce electricity costs even further.

Located half an hour north of Adelaide, our Bolivar Wastewater Treatment Plant is South Australia's largest sewage treatment facility, processing around 150 million litres of wastewater every day or the equivalent to 60 Olympic-sized swimming pools.

Currently, the renewable energy generated at the plant is sourced entirely from biogas production, which is a by-product of the sewage treatment processes. The plant is now around 85 per cent energy self-sufficient – achieved by installing and connecting three new gas engines and associated infrastructure to vastly improve biogas power generation.

The engines, which are regularly tuned to ensure optimal power generation, enable us  to harness biogas and produce renewable electricity. The energy produced is enough to power 4,000 houses per year.

Our sustained focus on generating renewable energy will see around 16,000 MWh of solar panels installed at our Bolivar site in 2020, boosting the plant’s energy self-sufficiency and providing the opportunity to export energy generated to the grid – offsetting our electricity requirements at other sites. 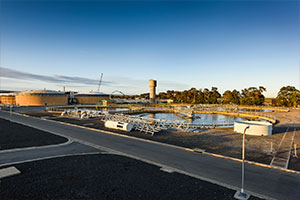